You best believe I waited with baited breath for the official start of Christmas music on 93.9 FM in Chicago! I was with my colleagues on that afternoon of Thursday, November 8th approximately 4:05pm CST; a calendar invite was even sent to remind us all of the glory to come! Admittedly, it was a bit of a tease and quite drawn out as is evidenced by this video…

Inspired by these shenanigans and just the holiday spirit in general, I decided to create my own personal list of Top 10 Christmas Songs! Feel free to share your thoughts or your own list in the comments. I’ll be curious to see what you guys think. You’ll notice how heavily it’s been influenced by film. Either way, enjoy, but know this! You won’t ever enjoy it as much or as early in the year as I will.

This was the first song played by 93.9 FM, which I had guessed correctly the day before. It really is a great introduction to the holiday season and Andy Williams’ voice is so inherently “Christmas” to me. Plus, it was re-popularized by the 2003 (I know, crazy; we are all so old now), hit film, Elf, starring Will Ferrell. When Andy sings it, I believe it. There are marshmallows for toasting. Apparently, there are also scary ghost stories as well…did you ever catch that lyric? WTF.

Rockin’ Around The Christmas Tree by Brenda Lee

This classic from John Hughes’ Home Alone is so nostalgic and fun! This song is one of my favorites to put on for a Christmas party because it gets everyone dancing, including my cardboard family and Michael Jordan. Also, I love having a strong rock ‘n roll female singer on the list! Get lit, Brenda! 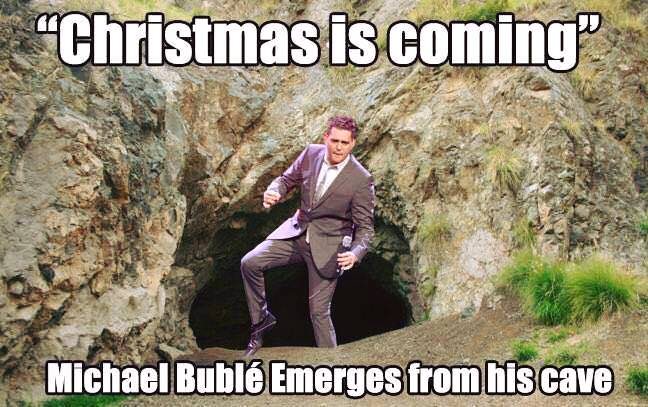 I’m teasing of course! Michael has had a tough few years supporting his little son Noah who has been battling liver cancer (hoping that he makes a full and speedy recovery)! I truly love Michael’s velvety smooth voice and as soon as I hear the first line of this song, I feel like I’m getting the Christmas hug that I want and deserve!

Bing may not be one of the best fathers, but he sure is a good crooner! I admittedly have never seen the film White Christmas in its entirety from start to finish. I usually catch Marge watching on TBS or something. Perhaps this year I will commit to a viewing. All I do know is that Vera Ellen is so tiny it’s actually bananas. And same.

Baby It’s Cold Outside by Ella Fitzgerald and Louis Jordan

This song has gotten a lot of flak in the last few years, given the heightened, and understandable sensitivity surrounding sexual assault and the #MeToo movement. I don’t wish to be insensitive at all, let me be clear, and I do recognize this song could be triggering for some. That being said, I do still love it and my favorite rendition is with The First Lady of Song, Ms. Ella Fitzgerald, and Louis Jordan.

Oh my gosh, this one is so swoon-worthy! Have you ever heard a more beautiful voice? This gives me cozy, warm feelings. Christmas Eve food coma goodness when you’ve switched to elastic waist pants. When I hear this song, I feel like everything will be alright. I just want to ride the buttery wave that is Nat’s voice! He gives me vintage Leslie Odom Jr. vibes.

When My Heart Finds Christmas by Harry Connick Jr.

So, this original song on the 1992 album of the same name was played in my house every year around Christmastime that I can remember. It’s since become a staple in my own Spotify playlist. And it’s HCJ, who is a total babe with a glorious voice. The corresponding music video includes a lot of close ups of Harry (not mad at it), including his tousled hair, a velvety brown corduroy jacket, and tannin colored turtleneck sweater. He also hangs out with multicultural kids, so he’s progressive and ahead of his time. Good job, Harry!

The First Noel by Frank Sinatra

I had to throw in Ol’ Blue Eyes in here because Christmas With The Rat Pack is one of my favorite albums, featuring Frank, Dean Martin, and Sammy Davis Jr. There are so many great tracks, but this one hits home the most for some reason. It gives me those deeper Christmas feelings. I’m not very religious at all, but I do connect to this song on a pseudo-religious level I think. Frank’s delivery is serious and earnest, and I just love it! 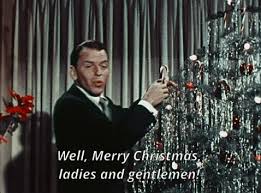 Unlike some of my other choices inspired by movies, this one was not (I’m referencing of course, the skit version from Mean Girls back when Lindsay Lohan wasn’t in the news for “dancing” in Mykonos). This choice I can attest to hearing in my home and on the radio growing up. I actually just looked it up and apparently it’s considered a country song. That makes it the only country song I really enjoy, I guess. Just kidding! Johnny Cash is cool.  True or false? Bobby Helms kind of looks like a dimpled Randy Quaid…

All I Want For Christmas Is You by Mariah Carey

You can’t NOT put a Mariah song on the list and because this one is featured in Love Actually so heavily, I couldn’t NOT choose this one. Also, please check out this badass ranking of all the turtlenecks in Love Actually. This video makes me want to perm my hair and wrestle Santa in the snow aka have a date. Also, she’s essentially justified minidresses as normal holiday attire. I’ll be going to T-Box without pants until I’m 80, I guess!